From Allostatic Agents to Counterfactual Cognisers: Active Inference, Biological Regulation, and the Origins of Cognition

What is the function of cognition? According to philosopher Peter Godfrey-Smith, cognition evolved to deal with environmental complexity. In light of growing evidence that plants and bacteria flexibly modulate their activity in response to environmental dynamics, Godfrey-Smith’s thesis would seem to imply that many (if not all) organisms are in fact cognitive systems. Here, we explore an alternative account that seeks to differentiate biological cognition from more pervasive kinds of adaptive plasticity. Drawing on contemporary advances in theoretical biology and computational neuroscience, we cash these distinctions out in terms of different kinds of generative models, and the representational and uncertainty-resolving capacities they afford. If this analysis is on the right track, cognition is characterised by the ability to detach from one’s present engagements with the world in order to entertain alternative possible realities — a process we refer to as counterfactual active inference.

Functional motor disorders (FMDs) are a broad subcategory of neurological conditions that affect bodily movement. They continue to puzzle medical science because, unlike well-recognised disorders such as Parkinson’s disease, their origin cannot be traced to distinct areas of the brain or nervous system. Consequently, FMDs are challenging to diagnose and individuals that suffer from these conditions can wait years before they are directed to appropriate treatments. This situation has motivated novel accounts from cognitive science, including the predictive processing framework that theorises FMDs might arise from a subtle but debilitating dysfunction in how the brain perceives the world and acts on these perceptual signals. But, this theory was untested… Until now. In an interdisciplinary study involving philosophers, psychophysicists, and neurologists, we examined visual perception in three carefully-selected groups: patients with FMDs, patients with traditional organic motor disorders, and healthy control participants matched across several dimensions including age and education. We found that patients with FMDs were identical to control participants across many of our measures. However, this was contingent on correcting a more fundamental difference between the groups—patients required a stronger perceptual signal than control participants. In other words, we had to substantially increase the contrast of the visual target in order for patients with FMDs to perform the task. Our study highlights that perception is an area of interest for understanding the origin of functional motor disorders and that visual perceptual tasks may one-day be an extra tool that neurologists can use to diagnose these conditions and provide individuals that suffer from these conditions with the correct treatment.

Modelling Me, Modelling You: The Autistic Self

The stereotype of autism spectrum conditions (ASC or ‘autism’) focuses on the social and communicative elements of the diagnostic criteria. In this review, we step back from autism as a social and communicative disorder and focus on the autistic self. The autistic self is a key component of the condition which has nevertheless received comparatively little attention. We provide a taxonomy for experimental paradigms in the cognitive sciences that aim to address questions related to the self. We articulate reasons based on domain-general cognitive mechanisms, autobiography and historical conceptions for why the self might differ in ASC. We conclude with elucidating the implications of a predictive processing account of autism on conceptualising the autistic self and how this fits with existing literature, with a focus on context sensitivity, model complexity, learning, integration, active inference and precision. This opens up large scope for future research on unique differences in the autistic self, which could be extended as a framework for understanding the condition as a whole in a new and unified way.

In visual search of natural scenes, differentiation of briefly fixated but task-irrelevant distractor items from incidental memory is often comparable to explicit memorization. However, many characteristics of incidental memory remain unclear, including the capacity for its conscious retrieval. Here, we examined incidental memory for faces in either upright or inverted orientation using Rapid Serial Visual Presentation (RSVP). Subjects were instructed to detect a target face in a sequence of 8-15 faces cropped from natural scene photographs (Experiment 1). If the target face was identified within a brief time window, the subject proceeded to an incidental memory task. Here, subjects used incidental memory to discriminate between a probe face (a distractor in the RSVP stream) and a novel, foil face. In Experiment 2 we reduced scene-related semantic coherency by intermixing faces from multiple scenes and contrasted incidental memory with explicit memory; a condition where subjects actively memorised each face from the sequence without searching for a target. In both experiments, we measured objective performance (Type 1 AUC) and metacognitive accuracy (Type 2 AUC) revealing sustained and consciously accessible incidental memory for upright and inverted faces. In novel analyses of face categories, we examined whether accuracy or metacognitive judgements are affected by shared semantic features (i.e., similarity in gender, race, age). Similarity enhanced the accuracy of incidental memory discriminations but did not influence metacognition. We conclude that incidental memory is sustained and consciously accessible, is not reliant on scene contexts, and not enhanced by explicit memorization.

There is a growing understanding that both top-down and bottom-up signals underlie perception. But it is not known how these signals integrate with each other and how this depends on the perceived stimuli’s predictability. ‘Predictive coding’ theories describe this integration in terms of how well top-down predictions fit with bottom-up sensory input. Identifying neural markers for such signal integration is therefore essential for the study of perception and predictive coding theories. To achieve this, we combined EEG methods that preferentially tag different levels in the visual hierarchy. Importantly, we examined intermodulation components as a measure of integration between these signals. Our results link the different signals to core aspects of predictive coding, and suggest that top-down predictions indeed integrate with bottom-up signals in a manner that is modulated by the predictability of the sensory input, providing evidence for predictive coding and opening new avenues to studying such interactions in perception.

Are there levels of consciousness? 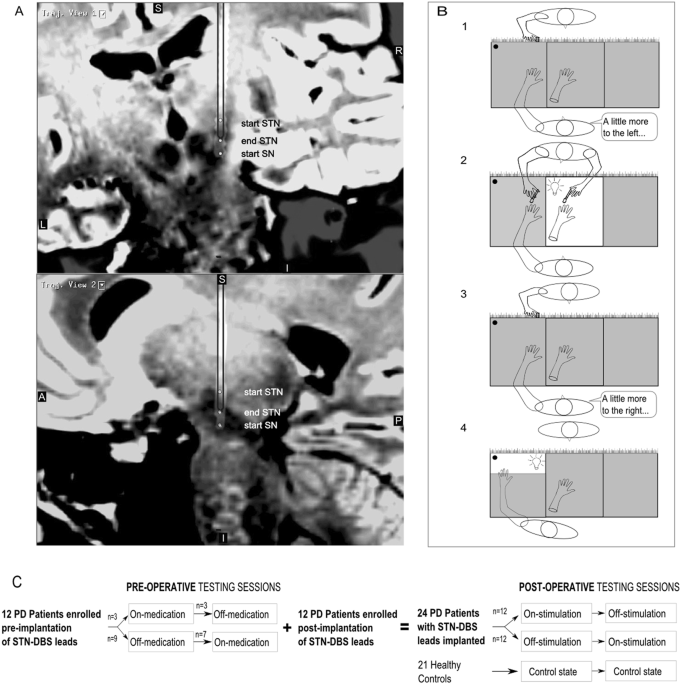 Parkinson’s disease (PD) alters cortico-basal ganglia-thalamic circuitry and susceptibility to an illusion of bodily awareness, the Rubber Hand Illusion (RHI). Bodily awareness is thought to result from multisensory integration in a predominantly cortical network; the role of subcortical connections is unknown. We studied the effect of modulating cortico-subcortical circuitry on multisensory integration for bodily awareness in 24 PD patients treated with subthalamic nucleus (STN) deep brain stimulation (DBS), in comparison to 21 healthy volunteers, using the RHI experiment. Typically, synchronous visuo-tactile cues induce a false perception of touch on the rubber hand as if it were the subject’s hand, whereas asynchronous visuo-tactile cues do not. However, we found that in the asynchronous condition, patients in the off-stimulation state did not reject the RHI as strongly as healthy controls; patients’ rejection of the RHI strengthened when STN-DBS was switched on, although it remained weaker than that of controls. Patients in the off-stimulation state also misjudged the position of their hand, indicating it to be closer to the rubber hand than controls. However, STN-DBS did not affect proprioceptive judgements or subsequent arm movements altered by the perceptual effects of the illusion. Our findings support the idea that the STN and subcortical connections have a key role in multisensory integration for bodily awareness. Decision-making in multisensory bodily illusions is discussed.